Preaching to Arrange a Meeting: A Lesson on Purpose

If you have ever preached or taught for any length of time, it has happened to you. Someone in a crowd approaches you and says something like: “Do you remember when you said……?”, and what follows is something very specific. The problem is, for the life of you, you can’t remember when you said it, and even more baffling is, you’re not even sure that you ever did say it. Not only that, from their explanation, it is obvious that God has used what was said. Maybe you wish you had said it.

So what really happened?

Maybe your memory is not nearly as sharp as it used to be, or perhaps they have you confused with some other really good preacher, and if they have, you are certainly not going to tell them any different. Perhaps they are confused. Don’t go there. Or, perhaps, just maybe, God spoke to them.

It seems today that preaching is more diverse that it has ever been. The approach to content seems broader and styles of preaching are all over the pulpit or, acrylic music stand, or no pulpit. It used to be that all preachers would wear their Sunday best when it was time for the service. Now, any good bowling shirt will do.   It would seem that what preachers are wearing today is somewhat symbolic for the state of preaching. And while it really doesn’t matter all that much what the preacher is wearing, it does matter greatly whether or not preachers understand why they are there and what it is they are trying to do.   If you happen to listen to a variety of preachers today, chances are you will be able to make a pretty good guess as to their age, simply by listening to their message. What the uniformity of preaching from ages ago accomplished was a certain model that most tried to follow. Now, the model is up for grabs, and while there may be many approaches and styles, the purpose for the preacher being in front of the congregation is not.

Today’s preachers are constantly being bombarded with questions of relevancy and application. If you are going to communicate with people today, better come across in a way that says you relate well and understand their life. Better create a need to listen. Better not construct any barriers to their hearing the message. And, you had better have something to say which they can apply tomorrow. Really, it better be something they can apply in the next five minutes. Relevance means it carries significance and importance for their life, and practical application means it that if it is implemented, it will help them change for the better.

While relevancy and application are friends of the preacher, there is a greater purpose in preaching. If I go to a seminar on car care, or a financial seminar, or the parenting workshop, or a session on conflict resolution, I can find both of them. I might even find a life coach who is extremely relevant and able to help me think in terms of practical application. So, where does that leave preaching? What’s different?

To begin with, preaching is much more than the communication of practical information for a better life tomorrow. Application is a part of it, but it is not the goal. Preaching is more than self-help, and it is even more than the practical application of God’s truth. After hearing the preacher, it is possible for people to leave the church with three biblical applications, much like learning three steps to craft a better resume, and in the mean time have missed something far greater. The greatest message of the Bible centers squarely on the person of God, and He cannot be contained in three quick applications for a better life.

In the classic textbook, Biblical Preaching, Haddon Robinson defines expository preaching this way: “Expository preaching is the communication of a biblical concept, derived from and transmitted through a historical, grammatical, and literary study of a passage in its context, which the Holy Spirit first applies to the personality and experience of the preacher, then through him to his hearers.”

While all of that is important, in the middle of the definition is something equally important, the Holy Spirit applying the message to the hearers. The Holy Spirit is a person, and He applies the message. That means you have a meeting between the Holy Spirit and the people and that speaks of the purpose of the preacher. The purpose of the preacher is to help arrange this meeting whereby the Spirit takes the word of God and applies it to the hearts of the people. This is far more than application. It is people hearing His word and meeting with God.

The word of God comes from God himself, and when the Holy Spirit personalizes the message, people meet with Him. It is as if they hear His voice. The preacher sets the table, delivers the main course which is the word of God and not the word of men, and invites people to the meeting. That’s when change happens.  Most people can’t remember last week’s sermon, but if they met God in the pages of scripture through that very same sermon, they will never be the same.

In response to the word of God, His voice may come to them specifically telling them something they should do. They might need to change something in a relationship, visit a neighbor, change a habit. The possibilities are endless.

But it is more. Perhaps they are discouraged. Perhaps hope is running low. Perhaps they really don’t know God very well at all, and through the meeting which the preacher helped arrange, they see a little clearer picture of who God is and who they are.  And when that happens, don’t be surprised if tears begin to flow, or the pain that has been visible on their face suddenly goes away. Meeting with God is far more important and far more serious than application divorced from the Person behind the application. Options become much more limited when it is God talking as opposed to you making a purely volitional decision which will benefit you.

God is all about relationship, and what He really wants is for us to know Him. We can’t get to know Him without meeting with Him and a prime time for that to happen is when two or more gather in His name and the word is preached.

Through corporate assembly, His presence is often manifest in ways not able to be experienced through hearing the message from a television screen in the privacy of a living room.  God can use a television screen. He can use a remote feed for a satellite congregation. The keys are that the message is received in community and after it has been received, time is given for reflection or response. This doesn’t have to be long or dramatic, but if no time is given, then the message may be more limited in its effect. It takes time to meet with God.

The purpose of preaching is to arrange this meeting whereby people hear His voice personalized for them through the pages of Scripture.

Not too long ago I had the privilege of preaching to some brothers in Christ who were incarcerated. Some had been there for decades, and others had decades in front of them. Some might possibly spend the rest of their life in prison.

The Calling of Levi is strategically placed. In Luke’s gospel it follows the encounter Jesus had with a paralytic. In that culture, the paralytic’s outward condition would be seen as a reflection of his inward state. Jesus addressed this inward condition when He said to the paralyzed man, “Friend, your sins are forgiven”.  That statement was a huge problem for the religious leaders who promptly and silently accused Jesus of blasphemy.  Only God can forgive sins.

Knowing what they were thinking, Jesus doubled down, “Which is easier to say, ‘Your sins are forgiven’, or to say, ‘Get up and walk’? But that you may know that the Son of Man has authority on earth to forgive sins…” He said to the paralyzed man, “I tell you, get up, take your mat and go home.” Luke 5:23-24. In essence what Jesus said to the self righteous leaders was this, “You’re right. Only God can forgive sins, and I am God. See that man walking? Got any questions?”

The paralytic narrative sets the stage for the calling of Levi which follows immediatedly. Why is it here? Because the calling of Levi will answer the next logical question.   If Jesus is God and He can forgive sins, just how much sin can God forgive? Levi was the poster boy for that question. He was the biggest sinner in town.   Mark, Luke, and Levi himself give tax collectors their own special category of sin when they separate tax collectors from the rest of sinners in their gospel accounts.

Jesus is now going to pick His twelve disciples, and when He sees Levi applying his trade, He fixes His gaze upon Him and says, “Follow Me.”   In those two words is the answer to the question, “What does God think of me?”

When Jesus said, “Follow me,” what He really was saying is this, “Levi, you’re just the person I’ve been looking for.” There’s the answer for my friends in prison and the answer for me.

How much sin can God forgive? What does God think of sinners? Luke says, “Let me tell you about Levi.” There’s more than just forgiveness in Levi’s calling. There’s Jesus seeking out the lost because he loves them and whether or not we are in a physical prison or in some other kind of prison, Jesus fixes His gaze upon us and says, “You’re just the person I’ve been looking for, Follow Me.”

My prayer was that my friends in prison might hear the voice of God for them personally in the calling of Levi. It was a meeting I hoped to help arrange, but really God is the one who arranges those meetings and when He does, I shouldn’t be surprised when someone approaches me from a crowd and says, “Do you remember when you said……?”

Reitz is the author of W(hole)Hearted.  He is a pastor and speaker specializing in strategic planning and leadership development. 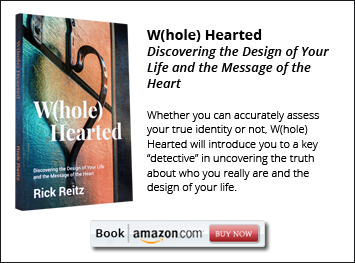